Discover the power of Brazilian coffees in 2020

Brazil as a coffee origin country

Brazilians often refer to their country as the terrinha. It is a term of endearment that means “little land” and that couldn’t be more ironic. With its continental dimensions and states bigger than many European countries, Brazil has been the largest producer and exporter of coffee on the planet for over 150 years with a wide diversity of growing regions from South to North, growing both arabica and robusta. The terrinha is a giant. 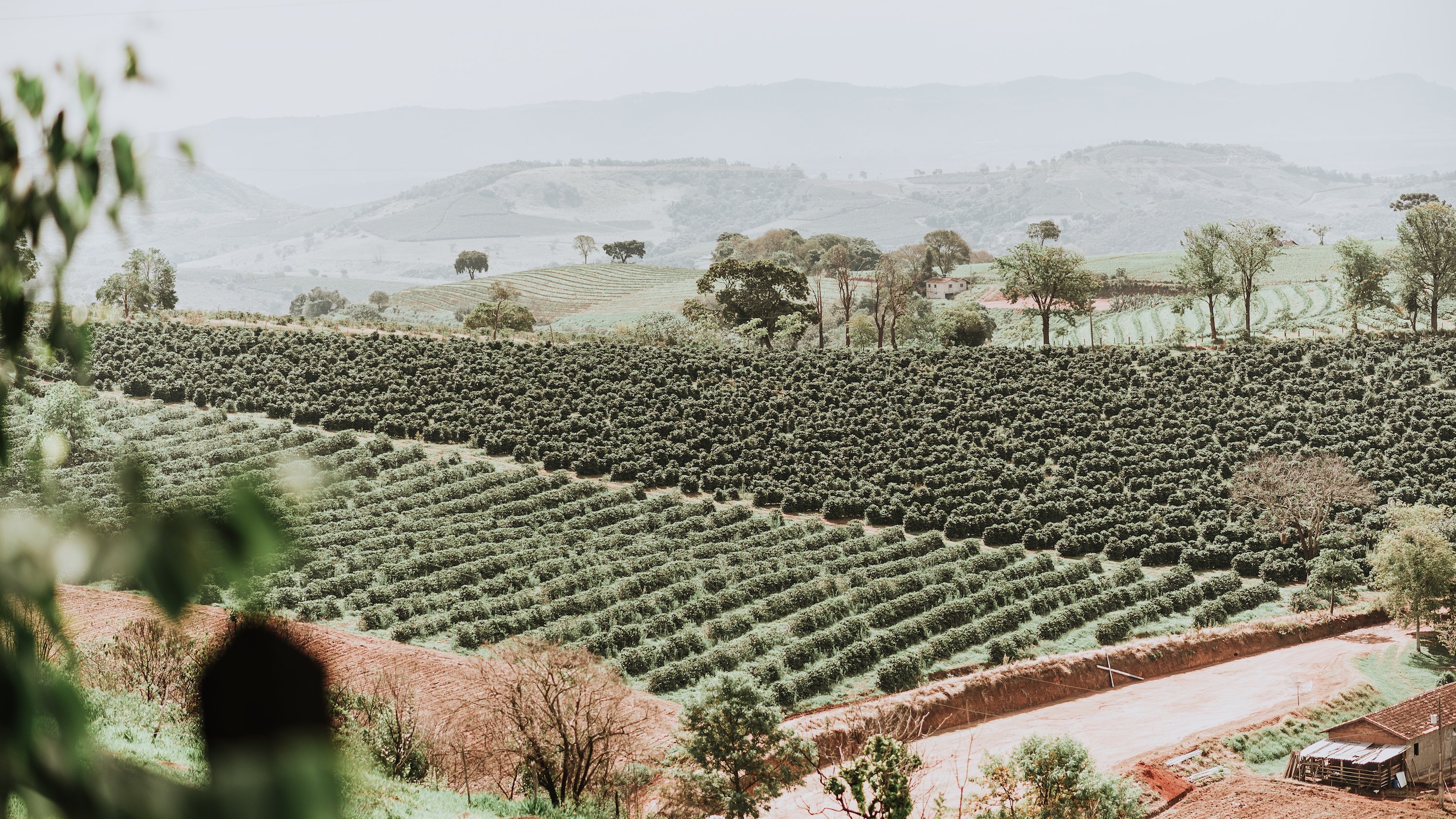 The term of endearment does make sense, however, when you think about the average farm size in Brazil, which is smaller than most people would think: less than 8 hectares! The sítios are operated as small family businesses, contradicting people’s expectations of large factory-type estates run by powerful coffee barons (an image inherited from the plantations of the 18th and 19th centuries).

Coffee production in Brazil is largely mechanized in comparison to other origins. Not only because the flatter landscapes and soft hills allow for the use of machines but because Brazilians invest heavily in technology due to high labour costs. The national industry has come a long way since 1859, when the first factory of post-harvest machinery was built, and today you find “selective harvesters” which offer better harvesting control and collect higher percentages of mature cherries. In 2020, Brazil is expected to produce a record of 67.9 million 60kg bags (15% more than 2019, a negative biennial year) thanks to stable weather conditions with a rainy summer and a dry winter. A combination of favourable weather and a positive cycle are also pushing yields up, with a forecast at 32.33 bags/hectare this season.

Brazil is known for producing mainly naturals and pulp naturals, known locally as “CD” or Cereja Descascado. Picking is mainly mechanical, with manual picking being adopted in certain areas due to inclination of the plot and to produce specialty grade lots. When processing naturals, the cherries can be dried on patios, mechanical dryers, raised beds or a combination of processes. Drying takes place in the dry months of the winter of the Southern Hemisphere when temperatures are milder and favourable to sun-drying. 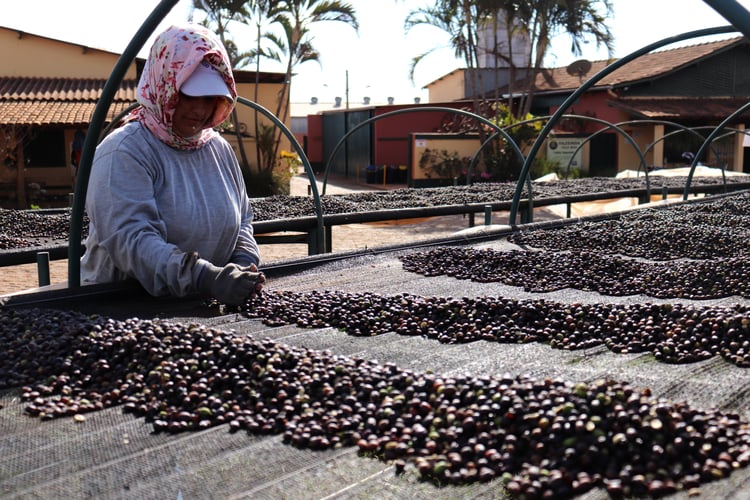 Pulped naturals first appeared in the 1950s but only became diffused in Minas Gerais in the 1980s and 1990s. The method was seen as an alternative for faster drying using less space on patios (as removing the skin of the fruit cuts its volume by half) and adopted mainly on farms where the humidity levels were high. Today, farmers can adopt both methods to achieve different flavour profiles as naturals tend to be fuller in body and CDs tend to be more delicate.

Brazilian farmers continuously innovate in post-harvest techniques. One of the biggest manufacturers of coffee processing equipment, Pinhalense, is Brazilian. Today, however, you can also find more artisanal types of processing like honeys, anaerobics and different experiments with yeast and even bacteria from the coffee plant’s microbiota. The country has a robust production of scientific research on the field led by local universities in partnership with farms and cooperatives that can produce high scoring coffees. 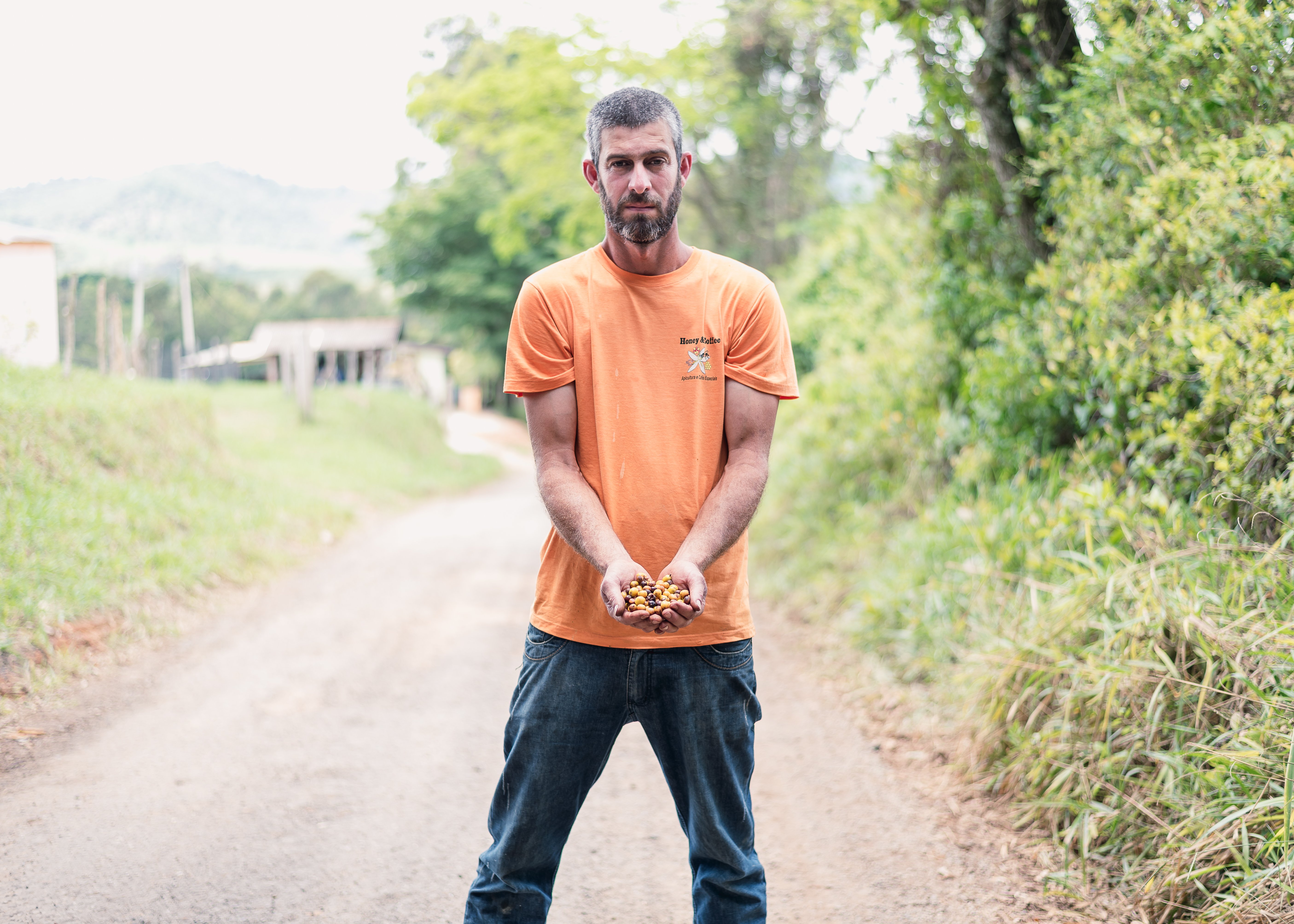 A good cup score is not the only thing Brazilian producers are looking for. They search for repeatability and consistency. The same principles and protocols behind the production of larger volumes of more standard qualities are now being applied to the world of specialty coffee to increase cup quality and stability of profiles year after year. The goal here is to replicate the quality you find in micro-lots in bigger volumes, making specialty more mainstream. There is no sleepy giant here. The force is awake.

Coffee first arrived in Brazil from the French Guiana in 1727 It was first planted in the Northern state of Pará and later in the 1760s in Rio de Janeiro. From there, the crop spread to the states of São Paulo, Bahia, Espírito Santo and Minas Gerais, replacing the main activity of that region at the time which was in fast decline: gold mining.

Production picked up in the 1800s, with São Paulo leading as the biggest producing state and receiving large numbers of European immigrants to work on the fields alongside slave workers. Italian, Portuguese, German, Swiss and Belgian were amongst the nationalities labouring in the paulista farms, growing in numbers as the slave trade declined. With the fast development of coffee production in the region, Brazil became the largest coffee-producing country in the 1880s. 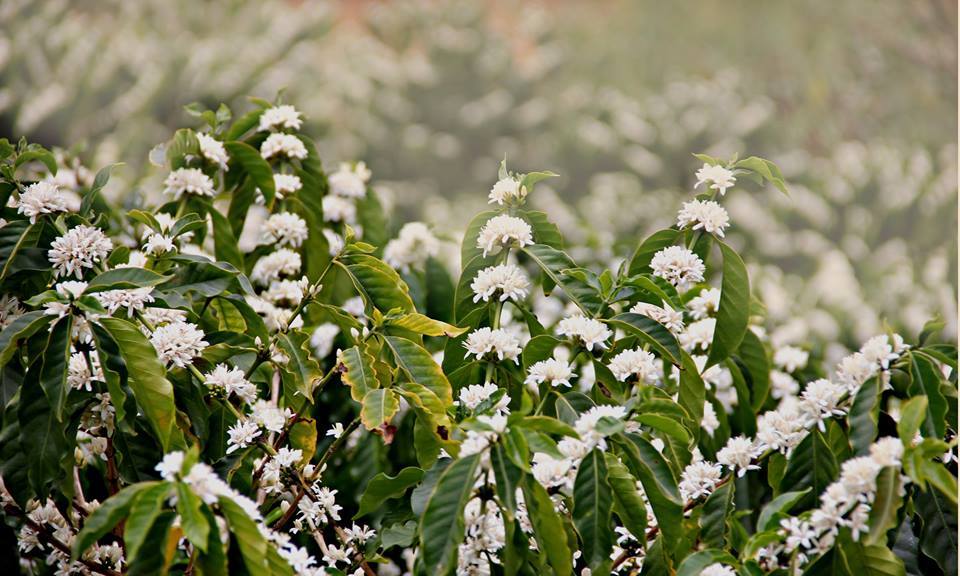 From the 1800s to 1929, coffee was the biggest source of wealth in Brazil and people would refer to it as the “Brazilian green gold”. Coffee became so important to the Brazilian economy that it actually shifted the economical centre of the country to the Southwestern region, bringing with it the growth of the industry, food manufacturing and construction. These states which gained importance through the growth of coffee production remain the economic centres of the country today.

With the economic crisis of 1929, demand for coffee dropped and Brazilian exports were heavily affected. Prices fell to such an extent that the Brazilian government burnt 71 thousand bags of coffee to avoid excessive devaluation. The volume of production in the country has been closely followed by traders and the international market over the last two centuries, having a big impact on international prices. 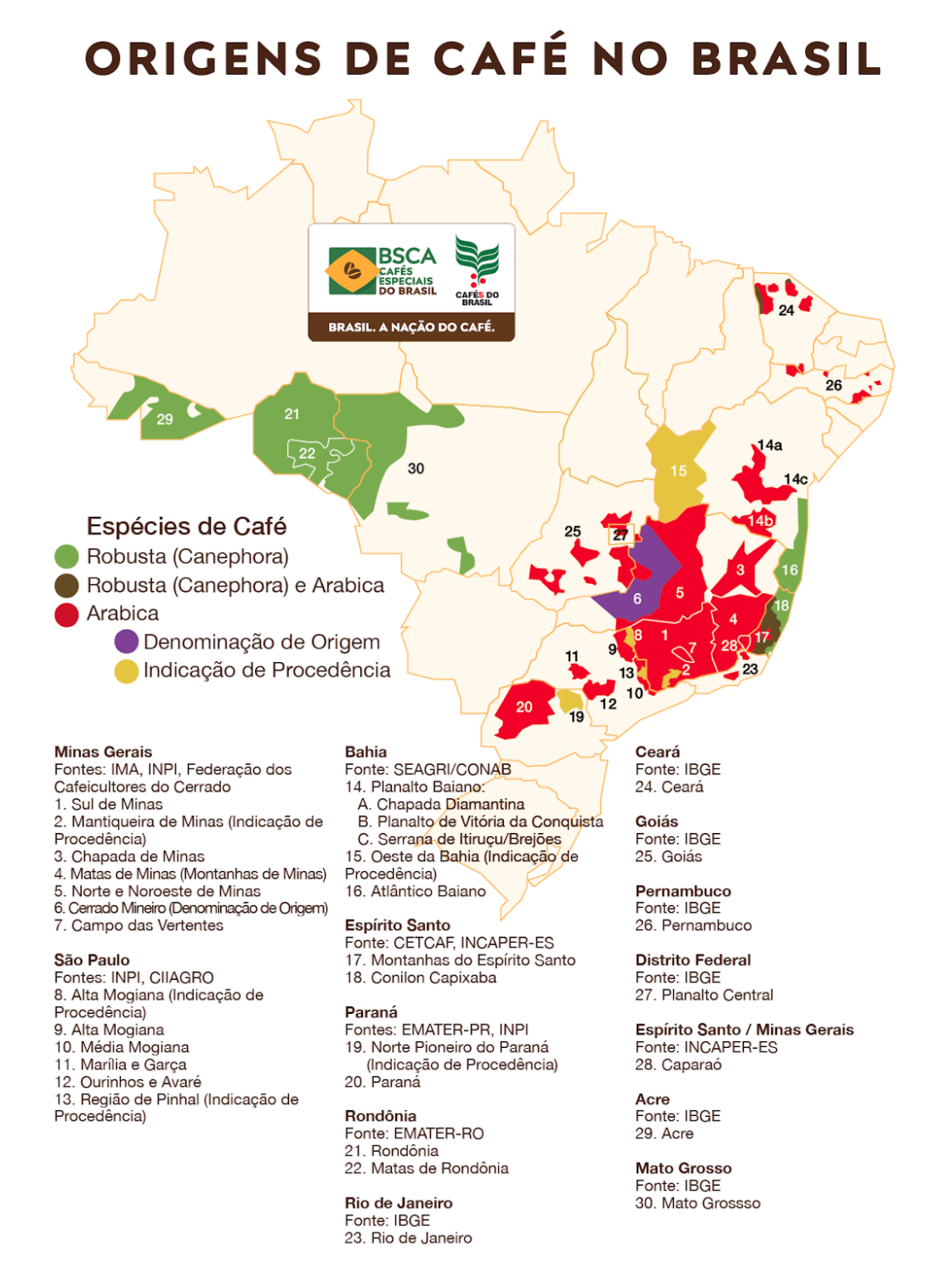 Minas Gerais: The Southwestern state is the largest producer in the country, accounting for around 50% of the total production and most of the specialty coffee volumes. Nearly 100% of plantations grow exclusively arabica. There are 4 main producing regions: Sul de Minas, Cerrado de Minas, Chapada de Minas e Matas de Minas.

São Paulo: One of the oldest and more traditional producing areas, distributed between Mogiana and Central Western Paulista. There is a mix of large estates and small family farms and they produce only arabica.

Bahia: Located in the Northeast of Brazil, with production of arabica in regions of warmer weather (Planalto da Bahia) but also in highlands with cooler temperatures (Cerrado Baiano). Also produces robusta to the South.

Paraná: The state is located in the South of Brazil, where the climate is cooler and there is a higher risk of frost. It has been the biggest producing state in the country, where many families started growing coffee before moving to Minas Gerais, and it has been recovering its production levels in recent years.

Rondônia: The state, located in the North of Brazil, produces only robusta due to lower altitudes and hotter temperatures. Farms are mainly small, family-run properties. 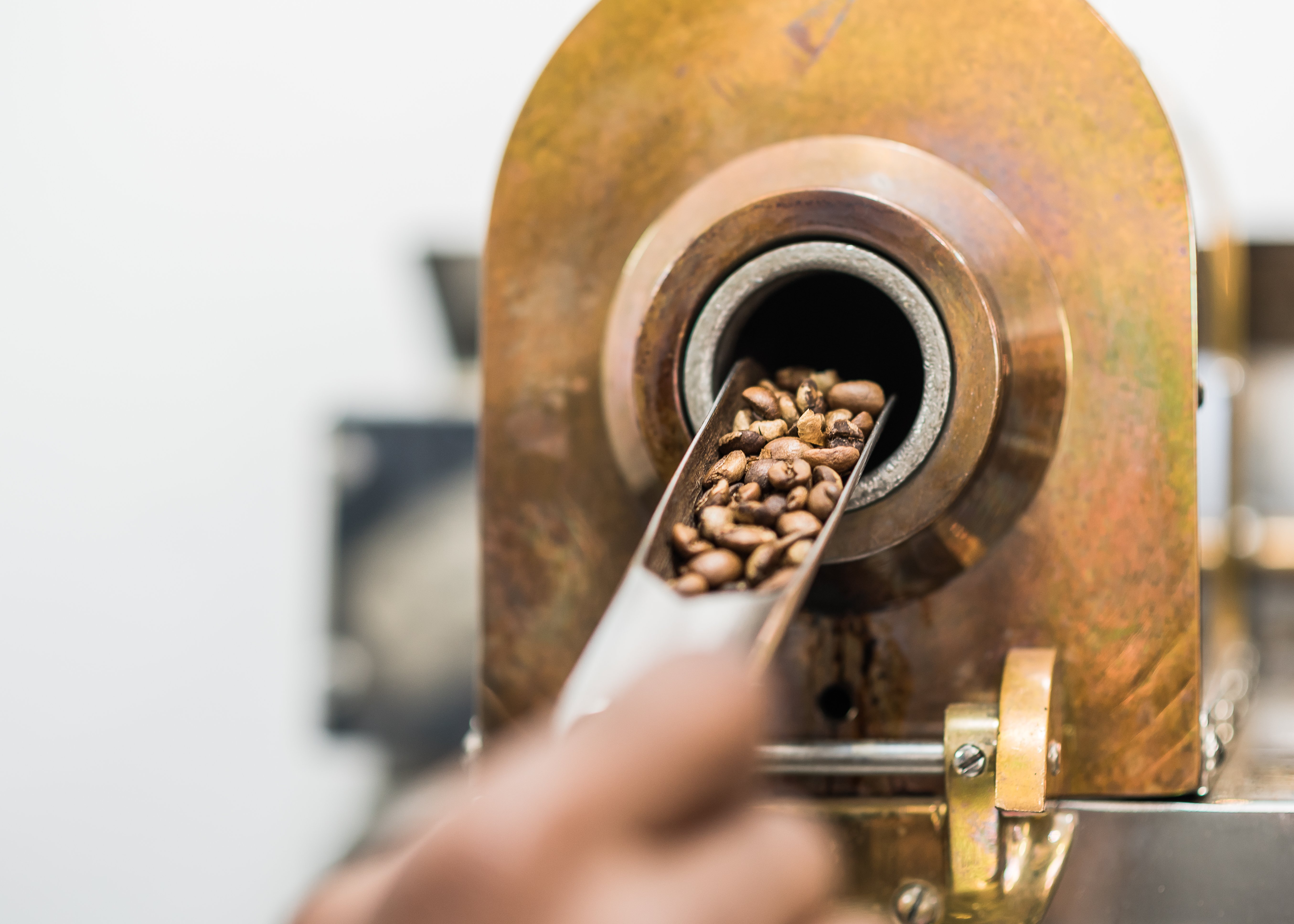 Taste the new crop and discover how the good weather favoured Brazilians this season: good maturation and sugar development, bigger screen sizes and consistency will make Brazil your origin of choice for espresso and filter this year! 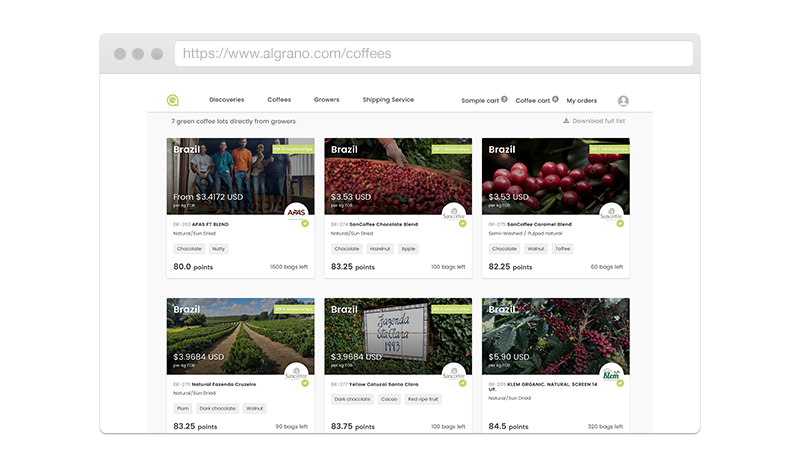 All you need to know about the Brazillian harvest this year. 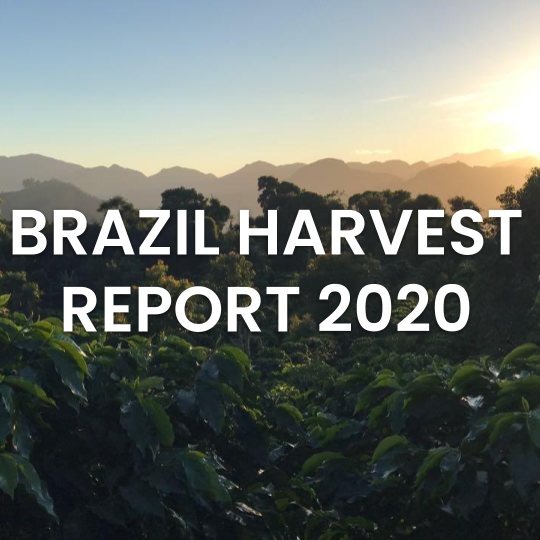